The Baxter colour printing process was developed by George Baxter (1804-1867). Having been apprenticed to a wood-engraver, he spent 8 years developing his technique which became internationally renowned. His first colour print, Butterflies, was produced in 1829.

The process combined an engraved metal plate with up to twenty engraved wooden blocks, each printed in a separate colour in a combined intaglio and relief process . The prints were both good quality and cheap and large numbers were produced. Baxter's prints were used for a variety of purposes including notepaper, pocket-books, decorated music sheets, and needle cases, and book illustrations.

Baxter's innovatory process was given a royal patent in 1835 (Patent No. 6916 – Improvements in Producing Coloured Steel Plate, Copper Plate and other Impressions). The patent lasted from 1835 to 1854. During the last few years of this period Baxter licensed his method to various printers, who used it until the 1870s.

Baxter prints can be identified by the characteristics of each separate technique involved in the process; the aquatint grain, the darker lines of the intaglio plate, and the squashed rims of the relief blocks.

Although it is estimated that Baxter produced over 20 million prints over his career, he died within two years of being declared bankrupt. Competition from rival companies, and the growing popularity of photography, alongside Baxter's own perfectionism in a laborious process all contributed to his financial difficulties. 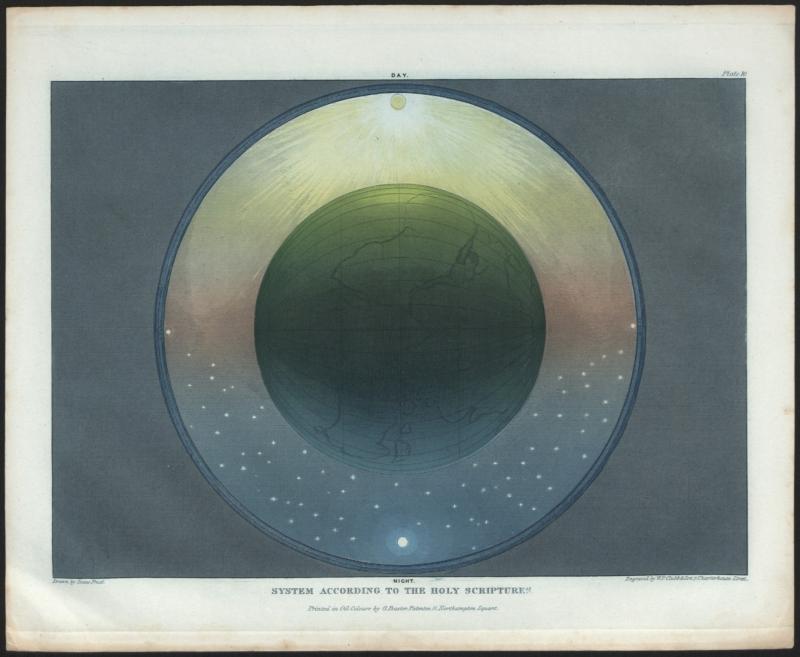 The Baxter prints in our collection are drawn by Isaac Frost and are associated with his Two Systems of Astronomy (1846). Frost was a prominent Muggletonian (a Protestant sect begun in the seventeenth century). Frost's Two Systems outlined the Muggletonian anti-Newtonian cosmology and aimed to discredit it by claiming it was contrary to the Holy Scriptures. This has been argued to be a reaction against the prevalence of popular Newtonian astronomical lecturers in the nineteenth century.