Relic of a secular saint

A close up of Einstein's handwriting.
{item.title}

Einstein's equations, connecting the age, density and size of the Universe. 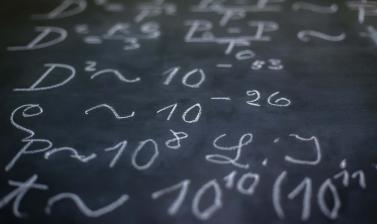 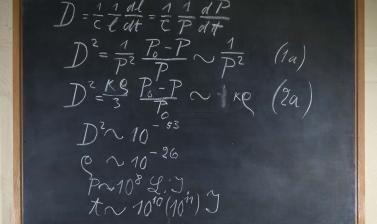 Albert Einstein (1879–1955) was already internationally celebrated for his special and general theories of relativity when he was invited to Oxford in 1931. This was a time of great excitement in the astronomical world, and The Oxford Times reported that the audience for his first lecture was full to capacity: ‘Large crowds of undergraduates and senior members of the University assembled … the audience numbered over 400 including university professors, Heads of Houses and several noted scientific scholars, and when the lecture began a number of people were standing at the back of the hall.’

This blackboard was preserved from Einstein’s second lecture, on 16 May 1931, and its equations connect the age, density and size of the Universe. During the 1920s, the work of the astronomer Edwin Hubble (1889–1953) on red shifts had established that other galaxies were receding from our own. In combination with his own theories, Einstein was able to use Hubble’s observations to explain this apparent expansion of the Universe. The mathematical models were very complex, but at about this time, Einstein was developing a much simpler model in which troublesome factors were ignored. This is the subject that the blackboard records.

It is a sign of Einstein’s remarkable international fame that his chalked equations were not rubbed out at the end of the day. A blackboard should be the opposite of a permanent record. But instead this board was brought directly to the Museum, where it has been preserved ever since. Some visitors today treat it almost as an object of veneration, anxiously requesting its location on arrival and eager to experience some connection with this near-mythical figure of science.