Lewis Evans, founder of the History of Science Museum 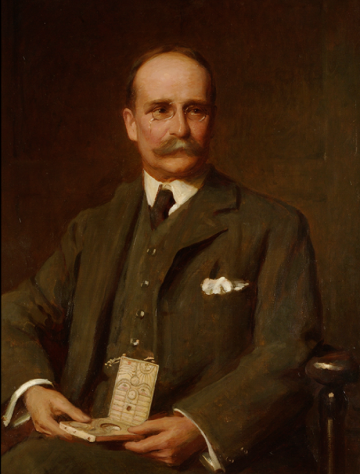 His friend and collaborator E. B. Knobel suggested he should be called ‘the Astrolabe Man’ (from the term 'al-asturlabi' found in the makers’ signatures of Islamic astrolabes). In truth, Lewis Evans (1853–1930) was the Sundial Man; his greatest interest and the overriding theme of his collection was sundials. The whole range of traditional mathematical instruments was eventually represented in the Lewis Evans Collection, from Napier’s calculating rods to gunners’ levels, from slide rules to sectors. But his focus seldom drifted far from the world of ‘dialling’, as the geometrical science of designing sundials was called. The magnificent collection of books and manuscripts that he formed to stand alongside his collection of instruments is also primarily a library on the history of sundials and dialling. Books of a more general nature will almost invariably have a neat little annotation by Evans at the front, indicating the pages on which sundials are mentioned.

However, astrolabes came to hold a special place in Evans’s life as a collector. The story goes that he searched for years to find even a single specimen; but then, as so often happens, they started appearing everywhere, and what had for long been an elusive object of desire for his collection became one of its glories. He acquired a reputation as the collector who would buy astrolabes, and found them frequently offered to him. By 1910, when he gave a paper on astrolabes to the Society of Antiquaries, he possessed 41 (he was proud to have overtaken the British Museum, which had been the largest collection with 33); and by the time he offered to give his collection to Oxford University in 1922, it contained 63. The story of him searching for years must be a little exaggerated. When he came to catalogue his collection, he recorded two astrolabes as having been purchased about 1880. This was quite early in his collecting career, which had its beginning with a sundial given him in the 1870s by his father, the antiquary and archaeologist Sir John Evans.

Lewis Evans was born in Hemel Hempstead into a family that belonged equally to the intellectual world and the world of business. Several ancestors and kinsmen on his father’s side had been distinguished scholars, writers, or mathematical scientists; his mother was a daughter of John Dickinson, founder of a well-known paper and stationery manufacturing company. Sir John Evans was one of those capable Victorians who seemed able to shine in both worlds. He assumed the management of John Dickinson & Co. and kept it in a flourishing state; he became an authority on water supply and hydraulic geology (on which his paper mills depended); and he chiefly achieved distinction as an archaeologist, with special knowledge of numismatics. His first two sons were educated at Harrow School, but after that their careers diverged. The eldest, groomed as the father’s intellectual successor, went on to university and a glamourous archaeological career; this was Sir Arthur Evans, famous excavator of Knossos and Keeper of the Ashmolean Museum. As the second son, Lewis was groomed as the father’s business successor, and in 1871 entered the paper-making business, eventually becoming its managing director.

If Lewis Evans regretted his exclusion from academia, the compensation was the wealth that enabled him to pursue his collecting interests. Encouraged by his father, he found an area of specialization that satisfied his mathematical talent, which he believed to be inherited from his great-grandfather and namesake, an astronomer and mathematical teacher at the beginning of the 19th century. Evans also collected books and prints relating to Hertfordshire, and there is a wholly different ‘Lewis Evans Collection’ of this material elsewhere. He was also a Freemason, and as Provincial Grand Treasurer was very committed to the charitable function of that office. He was a Fellow of the Royal Astronomical Society and a Fellow of the Society of Antiquaries.

The main impression one gets of Lewis Evans as a scholarly collector comes from the collection itself. His connoisseurship is evidenced as much in his discerning selection of acquisitions as in what he had to say about them. In a period when some collectors aimed more at ostentation, and were easily duped by fakes, the purity of the Evans collection is notable. In the small number of cases in which the correctness or authenticity of an item might be doubted by modern scholars, it will be found that Evans himself has already noted his own doubt. His judgement of dates and styles was equally discerning, and the several mistakes he made about dating relate to Islamic astrolabes, due to the reliance he had to place on his Arabic translator (usually E. B. Knobel).

Evans’s knowledge of instruments was applied to his business as well: he designed a specialised slide rule for use in paper manufacturing. He was an able and neat draughtsman and could draw a sundial or a coat of arms, or imitate the lettering of an inscription very accurately. He has not generally been recognised for the degree to which he pioneered new standards in cataloguing and studying instruments. His hand-written catalogue cards contain a wealth of descriptive detail and discerning assessment, and those describing his astrolabes were in fact the basis of R.T. Gunther’s book The Astrolabes of the World (1932), which seldom departs from Evans’s own descriptions and datings when describing astrolabes from the Lewis Evans Collection. Gunther compiled his ground-breaking book in honour of Evans and his collection, but its publication was unfortunately delayed until after Evans’s death. He published only a small number of papers himself, mostly about sundials, and wrote the chapter on portable dials that was added to the fourth edition of Mrs Gatty’s well-known Book of Sun-Dials (1900).

Evans particularly enjoyed exhibiting items from his collection by showing and talking about them at meetings of learned societies and by lending them to more formal exhibitions. In 1919, hearing that an exhibition of historic scientific instruments in Oxford included several astrolabes, he lent two of his own as an addendum. Out of this arose a realistic possibility for the permanent preservation of his collection, and in 1922 he made a formal offer to give it to Oxford University. The organiser of the 1919 exhibition, R.T. Gunther, had conceived the notion of a permanent collection or museum of scientific instruments and related objects, bringing together things that were scattered around Oxford; more specifically, he had his eye on the former home of the Ashmolean Museum (which Arthur Evans had moved to larger premises in 1894). The Old Ashmolean was not merely a building that would provide a home for Gunther’s proposed museum: as a gem of 17th-century architecture that had recently fallen into neglect, and a building that had played a central part in the history of science in Oxford and the history of museums generally, he felt it deserved to be restored, preserved and reopened to the public.

The University, the Bodleian Library, and the Ashmolean Museum (including paradoxically Sir Arthur Evans himself), were opposed to the scheme, and wished to treat Lewis Evans’s gift as an addition to the collections of the Ashmolean. Neither Gunther (a vigorous lobbyist) nor Lewis Evans in his quieter way were intimidated by this opposition. At the risk of losing the opportunity of ensuring that his collection would live on after him, Evans backed Gunther’s initiative by making his gift conditional on his approving the proposed location for its display. The story of their ‘campaign’ has been told elsewhere (the book Robert T. Gunther and the Old Ashmolean is available from the Museum’s bookstall). The outcome was that, in 1924, a museum devoted to historic scientific instruments and their study was founded in the Old Ashmolean, and at its core was the finest collection of sundials, astrolabes and other mathematical instruments ever formed by a private collector, and the library that accompanied it. The new museum opened its doors to the public in 1925, at first officially named the Lewis Evans Collection. In 1935, it was renamed the Museum of the History of Science. In 2018, it changed its name again to the History of Science Museum.