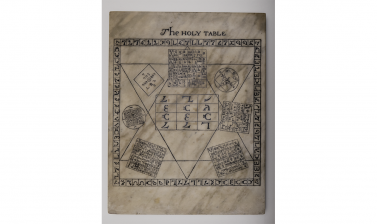 In his own lifetime, the mathematician John Dee (1527–1609) enjoyed an international reputation as a scholar, and acted as an adviser to Queen Elizabeth I. However, he is now mostly famous – or rather notorious – for his ‘angelic conversations’, in which, with the help of his medium (or ‘skryer’), Edward Kelley (1555–1597/8), he claimed to have conjured a series of angels in the years between 1582 and 1589.

This was no fringe pursuit. During the Renaissance, angels were believed to retain knowledge of the supernatural reality underlying the physical world of God’s creation. Adam, and therefore mankind, had lost this knowledge when expelled from the Garden of Eden. Dee believed that through interactions with angels, he could obtain a true understanding of both the spiritual and natural realms. For him, angelic communication was as viable a method as mathematics for understanding the natural world.

Under instruction from the archangel Uriel, a brightly painted wooden table was created on which the characters of the ‘Enochian’ alphabet were inscribed. Angels could simply indicate successive letters to convey messages, which Kelley then interpreted for Dee. The original wooden table is lost; this marble copy, made nearly a century after Dee’s work, was based on a published engraving that appeared in 1659, in a volume containing detailed transcripts of Dee’s angelic consultations.

The marble copy may have been owned by the astrologer William Lilly (1602–1681), the author of a series of popular astrological almanacs and an authority on more recondite questions of angels, spirits and fairies. The copying of a Renaissance artefact shows that an interest in the occult continued into the 17th century, a period traditionally seen as witnessing the rise of inductive and experimental approaches to the study of the natural world.