Over the summer, family visitors to the Ashmolean created a colourful globe inspired by Ashmolean objects made of many different materials, from a Chinese robe embroidered with silk dragons, to an intricately carved fan made of elephant ivory.

At each Globe event, volunteers invited families to handle objects made of different materials. Some were familiar and easily recognised, such as a replica bronze age sword, or an ancient Greek coin made of silver. Some materials were a surprise, such as a shiny spinning top made of Japanese lacquer. At first, many guessed that this was plastic, but learned it was derived from the sap of a tree. Some materials were more familiar, such as metals, wood, leather, shell and silk, but handling the objects brought out interesting questions such as: 'where in the world do these materials come from, how have they been used throughout history, and are they easily available or valuable and rare?'

Families were sent on a mission to find objects in the galleries made of specific materials, which provided inspiration for decorating the globe. More than 150 drawings were added to the globe, and families enjoyed finding where on the globe their chosen object originated. Finally, visitors made tiny origami ships to traverse the seas and transport the materials from place to place. But they had to watch out for the sea monsters lurking in the oceans, waiting to tip over the boats and their precious cargoes of marvellous materials! 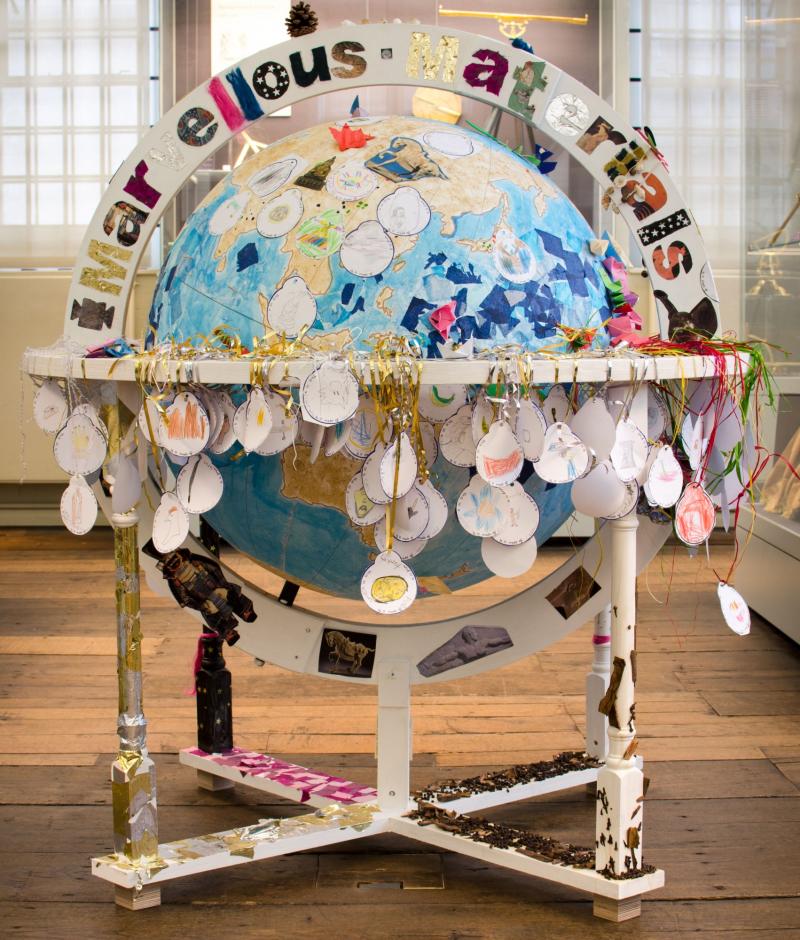 Families explored real and replica metal objects from the Museum’s handling collection made of silver, gold and bronze.

Visitors were invited to approach a sensory table at which they could smell and touch cloves, nutmeg, cinnamon, black pepper, green and black tea leaves, and coffee beans.

Families explored a handling table of objects made from wood and leather, as well as items featuring traditional lacquered decoration.

Families visited a handling table featuring objects made of ivory, shell and silk. The objects included shell jewellery, an ivory needle case in the shape of a parasol, spun silk, a silk moth cocoon, and a purse made of silk and velvet.

See the other Renaissance Globe exhibits