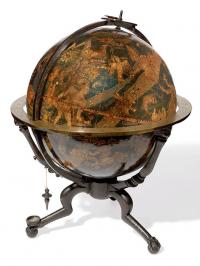 Johannes Schöner (1477–1547) was a well-respected German polymath who lived and worked in Nuremberg. In true Renaissance fashion, he was attracted to many different fields although he frequently used the term "mathematicus" to refer to himself. He was one of the leading astronomers of Europe in the early decades of the 16th century, but amongst his various other pursuits he was a priest, astrologer, cosmographer, cartographer, mathematician, scientific instrument maker and publisher. He enjoyed a significant reputation as a globe maker and cosmographer, and as a leading astrologer. He also played an influential role in the events that led up to the publishing of Copernicus' 'De Revolutionibus' in 1543. [ref: http://en.wikipedia.org/wiki/Johannes_Schöner]

He made his first pair of globes – terrestrial and celestial – in 1515, and Schöner was the first person to issue globes of the same size as pairs. This is one of only two known examples of the earliest surviving printed celestial globe.  He edited treatises left unpublished by Regiomontanus and his printing press produced maps as well as the gores for his globes, printed from woodcuts.

Larger than the pair of 1515, there is also a terrestrial companion to this celestial globe. The woodcuts for both the larger globes had been completed by 1533, when Schöner published a tract on each of them. The stand for this example is dated 1535.

A celestial globe by Schöner is included in the famous painting ‘The Ambassadors’, 1533, by Hans Holbein the Younger in the National Gallery.

The video below is designed to be used as a teaching resource which may be paused for discussion of key questions.

For more information on other material related to Schöner in addition to the globe, see The Renaissance in Astronomy special exhibition online

Other resources related to the project