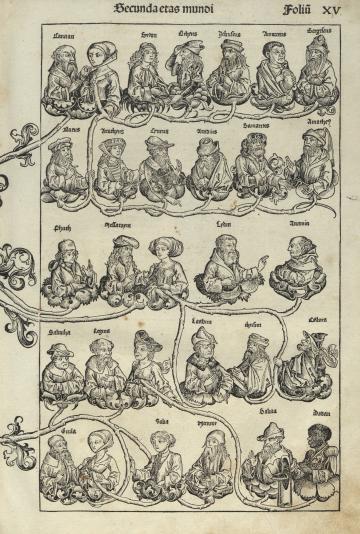 Leaves from the Nuremberg Chronicle, by Hartmann Schedel, illustrated with woodcuts, 1493. Inv 86969

As a technique for creating prints, woodcuts (invented in ninth century China) predate engravings. In Europe the earliest woodcuts, stamped on textiles, date to the thirteenth century. Production became more commercially practical with the advent of a reasonably cheap supply of paper.

Woodcuts have mostly been used for cheaper print production, useful for single-sheet prints such as broadsides, as well as book illustration. The wood block can be printed alongside type in the same press, making it more economical than engraving which required separate plates to be produced and printed.

They were particularly popular in Germany, with the Reformation providing the opportunity for many propaganda broadsheets to be produced. It is often harder to attribute woodcuts than engravings, as most were unsigned and even the country of origin can be difficult to establish.

From the beginning of the seventeenth century intaglio processes were becoming more popular and the woodcut tradition declined. There were attempts to reinvigorate it; William Hogarth produced two designs of his Four Stages of Cruelty in woodcut, published by J. Bell in 1751, in advance of the engraved editions in the hope of appealing to poorer individuals. However he was forced to abandon the production of the second two designs in woodcut due to lack of demand.

More recently other materials, predominantly linoleum, have been used and have proved popular as the materials are cheap and easy to cut and print.

Woodcuts are created in a relief printing process. This means the design is drawn onto a wooden block, and then the background areas are cut away leaving the lines in relief. Cross-hatched lines enable areas of solid black or shading to be printed. Corrections are not quite as effective as those possible with engraving, but can be made by drilling out portions and plugging with new wood. This relief surface is inked with relatively thick ink to stop it flowing into the hollows. The printing can then be done in a press along the same principles as those used for type, with pressure applied uniformly, but lightly in comparison to the force required for intaglio printing. They can also be hand-printed without a press, which can enable greater expression by varying the pressure.