This object is quite magical. It’s called a camera obscura, the name being derived from the Latin for darkened (obscura) chamber (camera). This particular one is about 200 years old and folds away into a wooden carry case. It would have been used by a
draughtsman for making sketches of scenes, such as landscapes or architecture, and was especially useful for capturing perspective. Above a rather theatrical-looking curtain that encloses the darkened chamber is a large lens mounted in a wooden panel.
This captures light from the scene, projecting it onto a mirror which is held at a 45-degree angle behind it. The mirror reflects the rays of light onto a piece of paper or canvas laid out horizontally on the base inside the wooden box. The observer,
shrouded by a piece of black cloth to exclude any other surrounding light from getting into the box, would then trace the outlines of the scene as seen projected onto the paper inside the chamber. 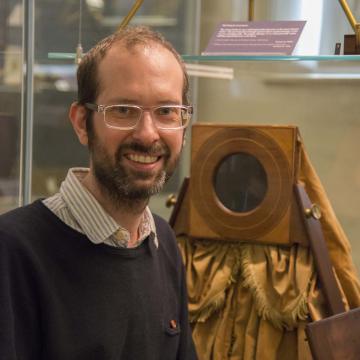 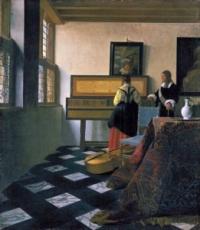 The image would appear the right way up because of the reflex effect of the mirror, but the wrong way round because of the inversion caused by the lens, so the artist would have to trace the final image in reverse. Camera obscura have been around for
several hundred years, although originally in the form of a pinhole camera. It was only from the early 17th century that lenses of sufficient quality were available to create the more flexible lens-mediated cameras with larger apertures allowing much
more light in to create brighter images.

There is plenty of evidence that masters such as Canaletto and Rembrandt made use of the camera obscura, but other artists may have been more secretive. For example, there has been much debate about whether the Dutch painter Johannes Vermeer may have
used a camera obscura to capture incredible detail in his exquisite paintings of domestic interior scenes, but there is no documentary evidence. The balance of opinion among art historians is that he probably did!

View from the Window at Le Gras – Joseph Niépce

As well as artists, the camera obscura was a useful accessory in the 18th and 19th centuries for the wealthy to take on the ‘Grand Tour’ to make drawings of Italian landscapes or classical ruins.

The camera obscura is useful for making drawings, but it is only focusing and reflecting light, not capturing it. The next big leap, beginning in the 19th century, was to use a device like a camera obscura but to combine it with a material that would
alter when exposed to the light, thus preserving the image.

The earliest known photograph, View from the Window at Le Gras, was taken in exactly this manner in 1826 or 1827 by the Frenchman Joseph Niépce using a camera obscura and a chemically-coated plate. So the camera obscura is a rather magical box after all
– with just a hole and some light, we have the basis for all photography, including, believe it or not, the camera in your phone.