The octant is a navigational instrument developed around 1730 almost simultaneously by an English mathematician, John Hadley, and an American glazier, Thomas Godfrey. Along with the sextant (which was invented a little later), it was the popular choice
for navigators in the latter half of the 18th century; by 1780, it had entirely superseded previous instruments. This was a time when England was a great centre of instrument-making, supported by the Royal Society and new manufacturing techniques.
Instrument makers such as Thomas Howard established workshops in major cities with trading ports such as London and Liverpool.

Instruments like the octant were the 18th-century equivalent to GPS; however, unlike today’s GPS systems, they required a good understanding of mathematics to operate them! Like earlier instruments based on the quadrant, the octant was used to measure
the altitude (height above the horizon) of the Sun or another celestial body, such as a prominent star at night. In combination with suitable data relating the height of the Sun to the date (contained in the mariner’s almanac), the latitude of
the ship could be worked out. In short, it depended on the fact that the further you were from the equator, the lower the sun would appear in the sky.

How do you use it? 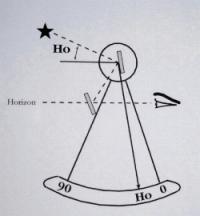 Although the shape of the instrument makes an angle of 45 degrees (an eighth of a circle, hence the name ‘octant’), the octant could measure up to 90 degrees by an arrangement of pairs of mirrors which double the angle of reflection. To take a measurement,
the navigator would hold the instrument upright and look through the sight mounted on the upper side to locate the horizon through a small window mounted on the opposite side. This window was split; half was transparent and the other half a mirror.
Another mirror mounted at the pivot end of the index (measuring) arm would be swung slowly across until it was in the correct position to reflect the sun into the sighting mirror. The navigator would adjust the index arm until the image of the Sun
reflected in the sighting mirror was lined up with the line of the horizon in the window beside it. At that point, the navigator would fix the arm in position on the scale by tightening a small nut, and the angle would be read from the ivory scale
to give the sun’s altitude using the vernier scale for increased accuracy. The use of shaded glass filters would allow the user to look directly at the reflection of the Sun without damaging their eyes. The filters are hinged so that they could be
moved out of the way when observing the faint light from a star at night. A small ivory-topped pencil located in the cross strut could be used to scribble the measurement down on an ivory panel inset on the other side of the instrument.

These measurements were essential to navigation, particularly when ships were out at sea beyond the sighting of landmarks. When used properly under stable conditions, these instruments were accurate to within a few nautical miles.

There were a number of successful instrument makers in England in the 18th-century who catered for the increasing demand for mathematical instruments for purposes such as navigation and surveying; these practices were essential to exploration, map making,
military manoeuvres, and, ultimately, trade and empire building!