The prints collection, recently catalogued by the Making Prints Public project, includes a significant number of illustrations (etchings, engravings and lithographs) taken from 18th- and 19th-century periodicals and magazines. The majority come from the Universal Magazine (1747–1814) and the Gentleman’s Magazine (1731–1907). The history of science is also with the history of the journal, as in the case of the Philosophical Transactions. As a strict distinction between popular and professional did not exist, science was not simply disseminated by experts to a more general reading public. 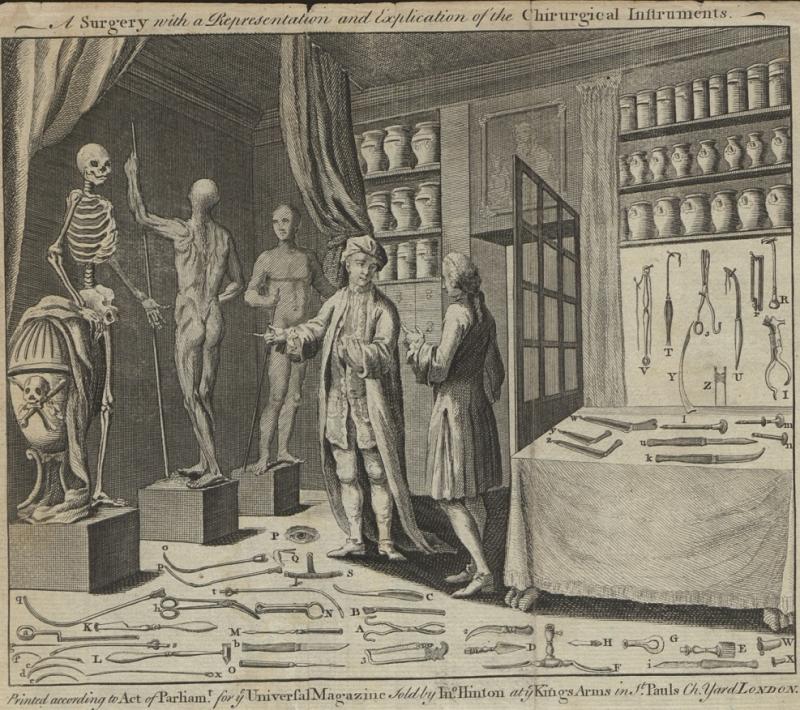 Print (Engraving) A Surgery with a Representation and Explication of the Chirurgical Instruments, printed according to Act of Parliam. For Universal Magazine. Sold by In. Hinton, London, 18th century. Inv 13692

In the 18th century, quarterly issued periodicals were literary and substantial. Aspects of scientific, medical and technological culture, including new technologies and inventions, portraits of scientists, and natural phenomena were represented. Genres within the periodicals market included cheap miscellanies, religious monthlies, satire and caricature, shilling monthlies, juvenile magazines, and biographies – scientific content could be found in all of them. Illustrated etchings and engravings were often of quite a high quality, particularly in publications such as the Illustrated London News.

During the Napoleonic wars (1799–1815) taxes on knowledge and the cost of paper had made magazines expensive (about two shillings). In the post-war period, the sixteen-page 'octavo' format at a cost of one pence became commonplace, aided by the invention of the stream press and the lifting of taxes on knowledge. New techniques of wood engraving, including end-grain, were developed and particularly used in this format for illustrations. Illustrations were often serialised and repurposed from one publication to another.

Scientific material was dispersed within fictional, satirical and political articles. Content was sourced from longer monthly magazines, further expanding the readership for those magazines towards women, children, and middle class professional men, with backgrounds in manufacturing, finance, engineering and trade.

Editors and readers contributed to and shaped the discussion and reception of scientific theories and discoveries. Darwinism and other developments in science were circulated not only in fact-based articles, but in fiction and poetry. This made them topical talking points. There were writers who were also scientists, such as the natural philosopher, journalist and biographer of Newton, David Brewster (1781–1868), who contributed to the Edinburgh Magazine and the Scots Magazine from 1799 to 1802. He became joint editor of the Edinburgh Philosophical Journal in 1819 with the mineralist Robert Jameson. Brewster’s articles were serialised all over the United Kingdom in general publications. Brewster's work can be seen in Inv. No. 13490 Print (Engraving, Colour-Printed) Containing Two Meteorological Hemispheres or Planispheres Entitled 'Map of the Lines of Equal Polarization in the Atmosphere', by Sir David Brewster, Engraved and Printed by W. and A. K. Johnston, Edinburgh, 1854

Find out more about the Museum's collection of prints