This instrument is named after the British inventor James Wimshurst, who developed it in the early 1880s for generating high-voltage electricity. A machine like this could easily generate a potential difference of up to 50 or 60 thousand volts.

How does it work? 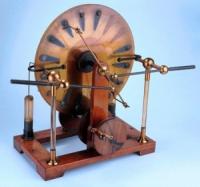 When the handle is turned, the two insulated glass discs are rotated in opposite directions by means of pulley-wheels. The plates are covered with tin-foil sectors spaced at regular intervals.

Only a small amount of charge residing on any of the sectors is needed to start the process by which each sector induces an equal and opposite charge on a passing sector on the neighbouring plate. This, in combination with the action of two sets of metal
neutralizer bars and their brushes set at right angles to each other, enables the exponential accumulation and separation of positive from negative charge.

The charges are picked up by metal combs positioned near the surface of the plates and conducted to capacitors mounted on the front of the machine known as Leyden jars. Once the electrical charge stored in the capacitors has built up to the level at which
the dielectric breakdown voltage of the air is reached, a lightning-like electric spark jumps across the gap between the conducting armatures. 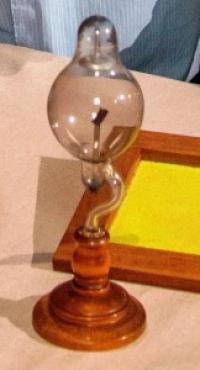 Such ‘influence’ or induction machines, as they were sometimes known, were far more reliable than previous electrical machines and so the Wimshurst machine became very popular in laboratories of the late 19th- and early 20th-centuries for electrical experiments
and, because of the high voltages they were capable of generating, were used in early X-ray experiments.

A wrist fracture X-ray from the Hickman archive, HSM

What about this specific machine?

This particular machine was used for this very purpose by its owner, E.G. Spencer-Churchill, who was an undergraduate at Magdalen College, Oxford when he purchased it in 1898. He took to experimenting with X-rays taking photographs of the limbs of his
friends for their amusement.

At the outbreak of the Boer War, Spencer-Churchill became a Lieutenant in the Grenadier Guards, and he took the machine with him to South Africa, where it was used between 1900 and 1902 along with a Jackson-type X-ray tube, and a fluorescent screen by
the Royal Army Medical Corps to locate bullets, shrapnel, and fractures in wounded soldiers, thus pioneering a new technique in battle surgery.

By 1896, Wimshurst’s multiple-disc machines found new use as Roentgen ray generators for radiography and electrotherapy. For this contribution to medical science, he was elected a Fellow of the Royal Society in 1898.